The 2017 Land Rover Sydney Gold Coast Yacht Race has been an entertaining affair so far.


At the end of over 40 hours of sailing and racing, it was Wild Oats XI that crossed the finish line in the first position. It posted a timing of one day 18 hours 37 minutes and 6 seconds. Wild Oats XI got the better of the popular Black Jack by a very small margin.

After the completion of sailing across 384 nautical miles, there are just 3 minutes and 31 seconds that separates the two boats. Both the boats are Reichel/Pugh hundred footers. There is no doubt that the next few months of the competition will be fought in great spirits between the Wild Oats XI and the Black Jack. This is the closest race result that this event has seen in 15 years. They will be competing against each other and the event will culminate in Hobart in December. END_OF_DOCUMENT_TOKEN_TO_BE_REPLACED 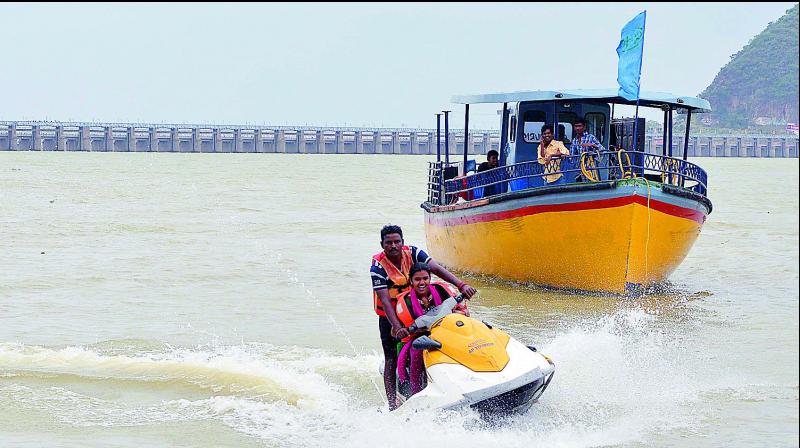 Rao has served Indian Navy and got retired from the post of Chief Petty Officer. Along with Roa three more members have brought one keel sail boat large in size for elders. This sail boat will help elder in teaching them sailing who want to take it as a recreational sport. In addition to that five Dinghies have also been inducted in the river. The Dinghy (Optimist) will help children of age above 8 to learn sailing. END_OF_DOCUMENT_TOKEN_TO_BE_REPLACED

The Aussie champion Liesl Tesch is all set to take on the world in the 2016 Rio Paralympics sailing event that starts on September 12. She has the gold medal in her name in the two person keelboat race (SKUD18). Tesch started her Paralympics career as a wheelchair basketball player and later took on to sailing where her fortunes changed for good. She has had a successful career in the sailing arena.

It was the Sydney Heads sailing that tempted her to shift her sport of wheelchair basketball to sailing. Her current sailing partner Dan Fitzgibbon reached out to her seeing her documentary about sailors with disabilities. He asked her if she was interested in going for a sail and she readily agreed – joining him on a Trogir Bareboat Yacht Charter. She thought that she could make it to the Paralympics in Rio, but never in her wildest dreams thought that could she try her hand out at the London 2012 Paralympics. She not only took part in the London 2012 event, but also won gold medal along with her partner Dan in 2012. END_OF_DOCUMENT_TOKEN_TO_BE_REPLACED

Madeira is a new venue for the Extreme Sailing Series this year.

The series saw a contest forming as the GC32 fleet saw Oman Air taking up two title positions in four races. They have definitely placed their claim for the honors. The day when Red Bull and Alinghi sailing teams tied for the first place as joint leaders the Omani boat came in for the third position. This day of races was calm and sunny as it dawned at Marina Funchal. It is located south of the island where the wind strength varied from three to seven knots. As a result, it led to the race program being curtailed again.

By the fourth race the wind had faded and Oman Air rose to take third place along with the SAP Extreme Sailing team, gaining about 48 points. Larson stated that the conditions of sailing were tricky as there was a strong current hat nearly pushed them over early for the starting line. That was not what they wanted as it would have gotten all other boats behind them. END_OF_DOCUMENT_TOKEN_TO_BE_REPLACED

The Royal Harwich Yacht Club made the final round of a well known industry contest in their 1st year of coming in. The RYA Club of the Year Award was introduced in the year 2008 to key out the club that has encouraged the game within their region, club that has asked people to get out on the water engage in various types of activities.

Woolverstone based Royal Harwich Yacht Club commodore Chris Brown stated that national acknowledgment of the work they have been doing to build up the club with their own marina as well as new clubhouse supports their belief that they have a terrific procedure supporting their many sailing activities. END_OF_DOCUMENT_TOKEN_TO_BE_REPLACED